A few Grand Meetups ago some of my awesome colleagues started a new cool thing, Happiness Patches. For any team you have been on, or done a rotation with, you get a patch. There are a few fun patches as well and they’re expanding a bit. The idea is similar to merit badges.

Each Grand Meetup I’d collect new patches and then they would live in a bag in my office, I never knew what to do with them. The one main idea I had saw others do was to put them on a backpack. Backpacks wear out though and I didn’t want to lose these. Finally this weekend I did something with them and I’m really happy with the result.

While the kids were doing a craft at our local Michaels store I went and grabbed a shadow box to frame the patches in. Had I just been doing the patches a regular frame would have likely worked, but I had a few pins to throw in as well so needed a big more depth. It has now joined the Automattic wall in my office. 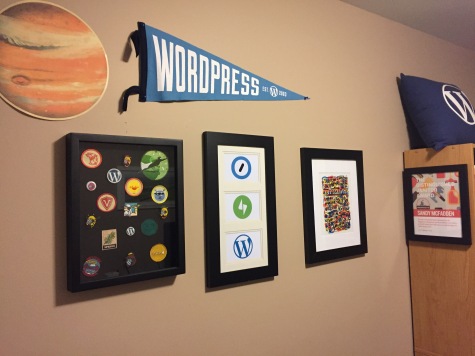 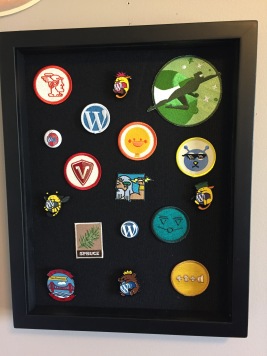 The wall started out with just the print based on the Automattic creed, then shortly after I added the three logos and it has continued to grow since then. A local business, who creates custom pillows, made the WordPress logo pillow for me. Jen wouldn’t let me use it in the living room so now it lives on the top of my bookcase. The next additions were the award I received at work, and the WordPress pennant. One of my previous team members brought me a big glow in the dark Jupiter sticker which made it’s way to the wall as well. Jupiter is our team name. Last night I re-arranged things a bit so I could make room for the new shadow box. The wall can still use some adjustments to fit things better, but I really like it and it makes me happy when ever I walk into my office.