Getting ready for bed Noah wanted to have blueberries for a snack. He had already eaten them a couple times during the day and can go through quite a few. Jen told him he couldn’t have any more today or else he would turn into a blueberry. Without missing a beat he said:

That’s what I want to do, that way I can eat myself.

Yesterday was one of those days where just nothing seemed to go right. I would have likely been better off if I had just stayed in bed and there were parts of the day when I felt like that is what I should do. Just call it over and get out of the way.

It started right when I got up. My full intention to get out for a run. Instead the cold seemed worse than it had been. I ended up getting into a coughing fit so bad I almost threw up, my nose was running like crazy, really everything just felt gross.

I settled into work and the work day actually went really well. But then I was getting ready to head to an appointment in the city. On a normal day it takes about an hour and twenty minutes to get there. I have myself just a little bit of wiggle room to take into account traffic. When I was getting ready to go I made myself a coffee for the road. On my way out the door I went to grab the mug but instead knocked it over spilling a lot of hot coffee all over the counter and floor.

After getting that all cleaned up I didn’t have time to make another or time to stop for one on the way, but off I went. On the highway about less than half of the way there I hear the warning that the highway I’m on has been closed between exits 6 and 8 in both directions. I had just passed the last exit before hitting this. Traffic slowed to a crawl, we had to exit the highway and take a detour through the back roads past a couple exits. There were times we didn’t move at all. I had to get Jen to call and tell them I wouldn’t make my appointment on time. They told me to come anyway, that I might have to wait a bit, but that they’d get me in.

Made it in about an hour after my appointment was supposed to be and had to wait about another 40 minutes to get to see someone. In the end it worked out but it also cost me over $100 more than I had been told before I got there, that was a bit of a surprise.

On the way home I had heard about a Restaurant close by that was serving Pictou County style pizza and that it was really good. I decided to try and cheer myself up by grabbing a slice of that. Maybe it’s because I had just had the real thing so recently, but this didn’t cut it. It was OK, but not like Acropole Pizza.

The highway was still closed on the way home so I had to go through the detour again. It was a bit faster than on the way in but still very slow with complete stops. When I finally made it home I went to make myself a smoothie and broke the lid on our food processor. I was scared to touch anything else after that.

Today on the other hand has been amazing so far. I stayed in bed past 8:30 am, I honestly can’t remember the last time I did that. Jen had taken all the kids for a couple errands so I was able to get up and take my time. I even made a coffee with nothing going wrong. After I was ready I took off to meet everyone to go blueberry picking. It’s just the beginning of the season so the berries were great and the weather was about perfect too.

After a quick stop home for some lunch we took off to the Wolfville Reservoir Park to go for a swim. The water was beautiful and my sister and her kids ended up coming too for a while. I didn’t stay in the water a long time but relaxed on the shore and then went for a little walk with Noah as he was done in the water too.

What a difference a day can make! 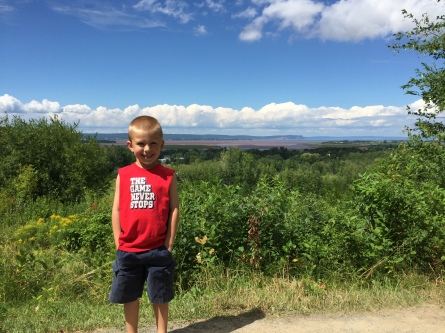 Noah and I went for a walk 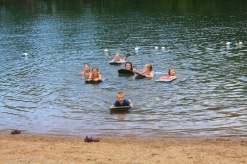 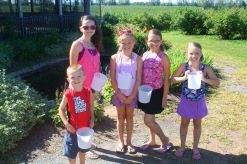 Waiting for the blueberry bus 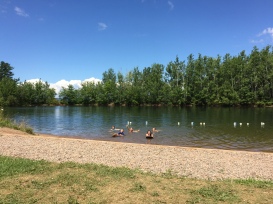 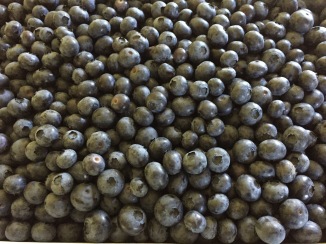 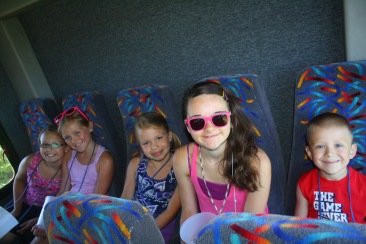 Taking the blueberry bus back to the fields

Last night we went out to pick some raspberries as a family. If you didn’t know I have a thing for raspberries. It isn’t even that they are my favourite, but they are delicious and the memories are great. This was even better as two of my Aunts were down visiting my Mom and they call came with us.

We only picked a few pints each and it didn’t take very long. It would have taken even less time if I hadn’t been doing the whole one for the basket, one for me trick. It wasn’t quite that bad, but I certainly taste tested some. It was my first time picking at Reimer Gardens but I think I’ll be back. They had a great setup and they do u-pick blueberries as well! 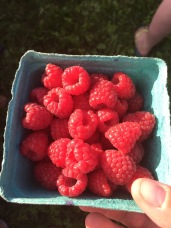 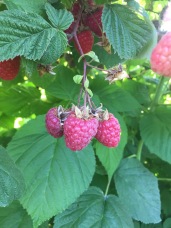 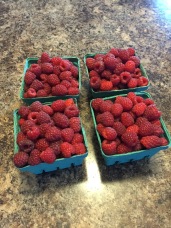 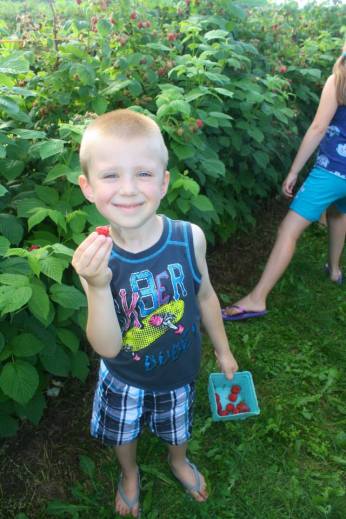 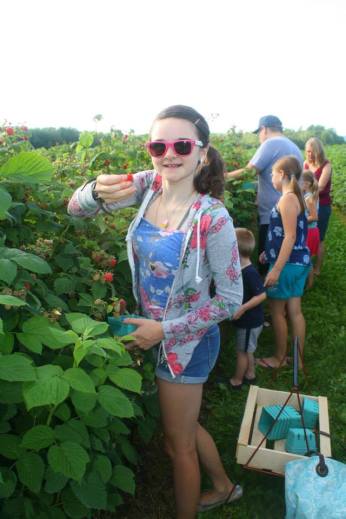